Partisanen! is a project that recreates life of Soviet partisans during WW2 on the territory of Belarus in form of real time strategy game. The game is created in GDevelop game engine.

Great game! The K-D (Kill-to-Death) Ratio is in need of a big change. I send a soldier to a garrison to farm kills. They die, obviously, after taking 160 germans with them. I send in 200 troops, 49 deaths.

Thank you! I can explain what you've got during your battles -_-. The first soldier was an experienced saboteur from NKVD, so he planted explosive on the german barracks, resulted in 160 kills. Meanwhile 200 troops was not properly trained and got under crossfire from german mortars and machine guns.

Going to echo what so many others have said as probably one of the few players to actually achieve a total victory. This is a beautiful little game that needs some more crucial work, because at present it is basically unplayable as intended, but utterly exploitable to the point it is broken thanks to abuse.

The graphics, the sound, and some of the basic mechanics work very nicely indeed, and I can already see how the game as a whole would work.

But the issues. First, a Bug: By late game now when I have started to send 3-4 "medium" sized (40-80 sized) task forces out in close proximity, there is a chance that if their missions complete near simultaneously one will more or less overwrite the other, meaning I have a bunch of valuable- really, priceless- troops stuck in limbo and permanently unusable, more or less deciding to skip the war out (I can't say I BLAME them in light of everything I am going to touch, but it is an issue).

But the more pressing issue is mechanics.

I agree with Kieronymous that at present, the game mechanics basically give too much reason to "Hide in the Forest and wait until Liberation Day." The Germans never target you, the traitors and informants never threaten your existence like the briefings indicate, and so on. And since the main mechanics of the game are so troubled, one might as well stay in.

There are two major issues with this game, besides the almost tertiary issue of there not being much of a "spur" or momentum meaning you're disconnected from the nominal success or failure of your missions.

The first is that the game puts you thoroughly at the mercy of RNG in really bad ways.

The second is that there are not enough mechanics to assess or manage risk.

One of these by itself would be hard but manageable. But together they absolutely devastate the game.

Ok, so starting with a random number of partisans? That's ok. Random chances of success or failure in missions? NOT that great but POSSIBLY Ok. Random mission popups? Ok.

The issue is the sheer amount of RNG. In particular in battles. Like one time I sent 196~ some troops to storm one of the German garrisons. We "Lost", losing something like 6 and including more than a hundred dead. I say "that's pretty good" and- not knowing if the enemy automatically refills or what have you- I send my troops again. This time they spank us, I lose 40something and they lose 20something.

No real rhyme or reason to it.

This sort of plays havoc all over. The RNG has too much of a hold on battle results, which coupled with the ludicrously vague descriptions of enemy forces and whatnot and the arcane (at best) or random (at worst) criteria for success or victory means that i player that isn't savvy can "win" themselves and their partisan army straight into the grave, Pyrrhus style.

But even this would be tolerable except for the other horn. I came up with a decentish way to theoretically win the game about five minutes in, namely avoiding direct confrontations with the bulk of the German forces and knocking off "lighter" targets (i say that, but I don't really care that much if the mission fails or succeeds, more on that later) and slowly build m way u pto attacking the death squads, and then to the fortresses.

AND then I ran out of the "soft" targets in spite of waiting. Which brings us to the other issue. Of all the things that are random in this game, the ability to actually skip missions is not one of them.

Your "victorious" army reduce itself from 150 to 20 people and looking for a good Prisoner Search mission to try and rebuild your forces? F You, enjoy taking on Hunter-Killer Squads. You want to wait a bit so you can rebuild your forces by recruitment and training? F You, only way to recruit is by battling, and getting a random proportion of troops, hence why you might save an entire village from the Einstatz that have been inexplicably taking months to kill everyone, lose have your army but triumph, and have not a single soul join up.

This flips one of the key advantage of real guerillas on their heads. The ability to pick and choose their battles is one of the VERY FEW advantages they really have, and here the fact that every mission will linger permanently until taken takes that away from you.

There BADLY needs to be some way to "skip" missions, to lay low and wait until one can find a better chance to strike. That ideally shouldn't go too far- because the game rewards doing nothing too much as it is- but we shouldn't have to.

What's even worse is the lack of specificity. How much is a "Small" enemy force? 10 people? 50? What are our chances or winning?

The only reason I know about the size I need for garrison   attacks is because you mentioned it in the comments.

This is bad, because intelligence is one o the most crucial skills for a guerilla. So having some ability to gather intel and get a ballpark estimate of A: the number of enemy, and B: what our chances of taking them out with more or less this force goes.

Especially since the game really doesn't specify much. Did the traitor escape because he saw half of Belarus making a single, coordinated march towards his village, so maybe a smaller unit would be more likely to catch them by surprise? How large are the "Squads" going around burning villages?

I don't know, because the game doesn't tell me. I suspect because the game honestly doesn't know itself, due to the wildly counterproductive nature of the RNG spitting out ludicrously contradictory results.

And this is made worse because the player doesn't really have much way to CONTROL whether a given mission succeeds or fails, and worse doesn't have much reason to care. I'm not happy unless I am taking in more partisans than I'm losing, which is why I'll be happier to "lose" a mission that sees 5 Partisans die, 3 Germans get killed, and whatever mission we went off fail, so long as we get 9 Partisans recruited than a "Victory" that sees the Germans and I lose dozens of men apiece while I get 12 people. There is no real "hunger" for victory, to kill more Germans, and so on. Nor is there much hedging one's bets. There is only RNG.

Which is how I actually learned the secret to Guerilla War Theory, according to this game.

From my camp deep in the woods, I would look over the missions, and- outside of easyish prisoner missions- I would designate a single Comrade for a given mission. Let's call him "Comrade Suicide Bomber." DorkaDorka Stalin Urrah, if you will. I would then gleefully send the designated Comrade Urrah alone towards their almost certain death at the hands of whatever opposition I faced. Most times they did indeed die, but sometimes they surprised me, whether it was singlehandedly saving villages (sometimes posthumously) or assassinating traitors.

Then as often as not, assorted people might be inspired by this Solo Comrade's act of usually suicidal bravery, before picking up the map on their corpse and walking back to camp, usually giving me far more people for a mission than the one person I lost. Rinse and Repeat, especially since this cleared mission markers and let them respawn.

And eventually, this is how I mustered a Great Patriot Army capable of storming the German garrisons and annihilating them by late 1942.

I take it you can see the problems with this.

Which is a shame. I like this so so much, and at essence it could be such a great way to represent partisan warfare.

But as it is, well...unworkably broken, including on some of its fundamentals.

I hope you don't leave this. I wish you the best of luck.

EDIT: Addendum to my previous comments, but this is getting ludicrous.

So I managed to completely destroy all three garrisons of Germans by April 1943 (and even that would've been earlier had it not been for RNG making me lose 240+ men when destroying the second, forcing me to spend months rebuilding) through the wonders of completely ignoring all nuance or hedging in favor of being Communist Hashashin.

Now the game doesn't acknowledge that I did this and won the "Glorious Victory" and I had to wait to win the "Normal" victory. But apparently my brave Comrades killed 2,025 Germans while losing only 717 and recruiting 1,065, fgirues that would indicate I am greater than Tito, Washington, and Mao put together.... when I'm really just throwing troops out.

The map is dotted with stranded troops.

This needs serious work, for starters to acknowledge when the victory conditions are met.

I like this game a lot, though some improvements can be made, such as fully translating the game to Russian, and I would like to have more micromanagement, just some thoughts

Edit also the ability to save/pause the game

Thank you for you suggestions.

Can you point me where there's no translation? If you click on Red USSR flag on first screen you will see russian version of game.

where can i find the main menu music

Mechanically speaking, victory is assured in this on the basis that the Red Army will come and liberate the country. There are essentially no stakes and attacking targets will only get your friends killed. You may kill more Germans but you'll be lucky to have lower than a 90% death rate in your army for what seems to be no good reason. If Punish the Punisher, Rail War, and Kill the Traitor missions had a time limit that would give it a sense of urgency especially if there was a civilian casualty counter. Additionally I'm wondering if it is possible to take down the Nazi fortresses? It's possible after three playthroughs I'm not yet good enough but it may be that recruiting the kind of numbers necessary is just not feasible in the game.

If your intent with the meaning behind the mechanics was to say that the efforts of Belarusian partisans were essentially fruitless and the only thing that mattered was the Red Army the mechanics do support that. However I don't think that was the intent, I believe the intent is to honor the sacrifice and valor of these nazi hunting badasses and I applaud that. I very much enjoy the game, edits or no and if you're someone reading this I highly suggest you do.

I'm preparing next release of game where will be some changes to gameplay, as different partisan's commanders, railroad diversion mission will be placed on real railroad on the map, rivers can be crossed only via bridges and so on. Time limit for missions will be also included, as other players asked for it.

To take down fortresses (garrisons) you need to send about 200-250 partisans on that mission. There are about 150 to 300 nazis in that fortresses.

So if you will remove all 3 garrisons you will get another victorious ending.

I better get good then :) 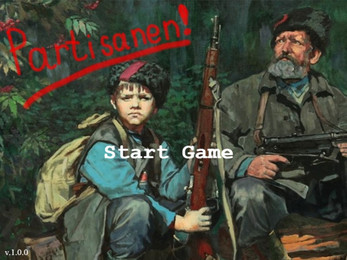 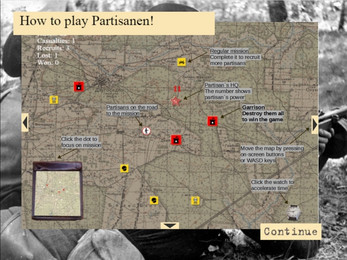 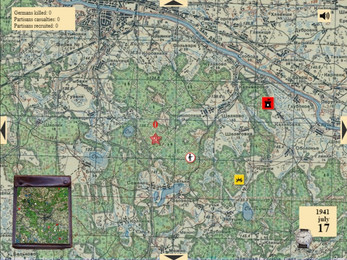 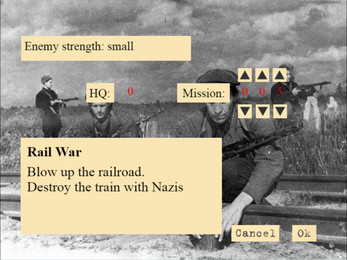 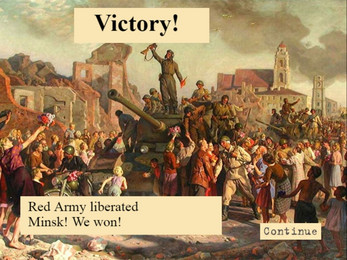